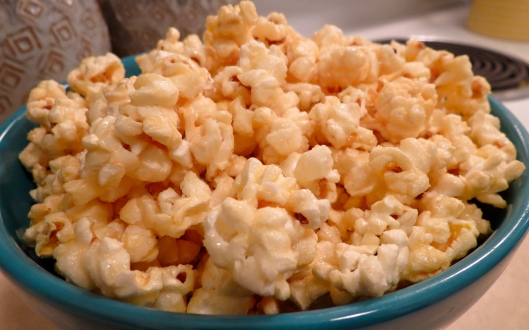 I grew up in a fairly healthy-eating household.

I mean, sure, we had our occasional pot pie evening or apple cake weekend, but in general my momma made sure that we were fed meals that were low in fat, high in whole grains and always included a protein and plenty of veggies.

Sundays were the one exception to that rule. On Sundays we would eat a big lunch after church and snack in the evenings. It was that snack that was open to…well, just about anything. Usually it was popcorn, but every once in a while, plain old popcorn would turn into something much better: caramel corn. 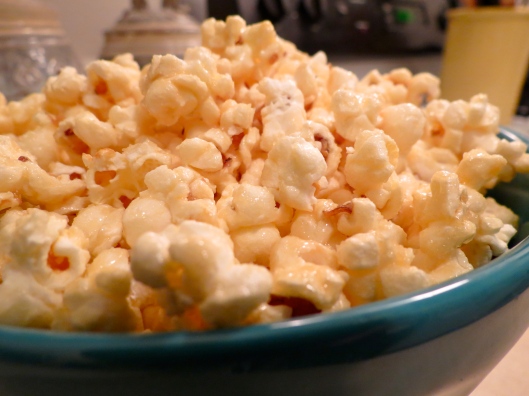 This recipe came from my mom’s cousin Lisa (and so, in our house, is known as Lisa’s Caramel Corn). It is crazy easy and the best part – it’s super quick, too. Because it utilizes the microwave – which, let’s be honest, is right up there with the best inventions ever – it cuts out long baking times. Start to finish, this caramel corn took me less than 20 minutes to throw together, and that was because I was moving kind of slowly.

Also, this stuff is a total hit at pretty much any get-together and would be perfect for your Super Bowl party this weekend.

Just don’t make it too far in advance, or you will accidentally eat it all and won’t have any left to feed your friends. 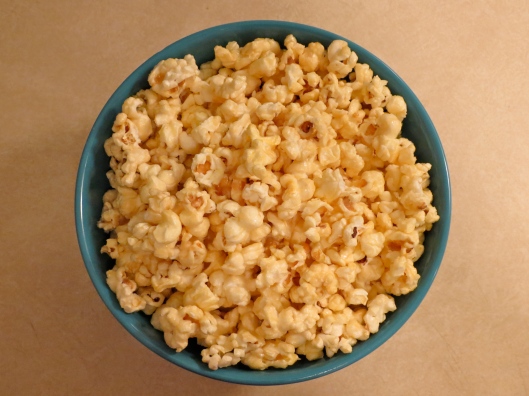 On another note, later this week the blog is scheduled to be moved to a new hosting site. Supposedly you guys should not notice anything – everything should still be up and running during the process – but on the off chance that something happens and things go dark for a bit, stick with me: I’ll be back.

(I hope you read that as creepily as I said it in my head.)

Measure out baking soda; set aside.

Combine margarine, sugar, corn syrup and salt in a saucepan; bring to a hard boil, stirring constantly. Boil for 2 minutes (still stirring), then remove from heat and immediately stir in baking soda.

Caramel corn will harden and start to stick together as it cools, so you may want to stir it to break it apart periodically. This is easiest to do with the handle of a wooden spoon.

*If you have a high-powered microwave, you may want to lower it one or two levels, or slightly adjust the microwave time, to keep the sugar in the caramel from burning.

Up to this point, I have done a pretty good job of presenting you with healthy breakfast recipes for the …

The world tells me that the Super Bowl is coming up. Well, maybe not the world…but definitely Facebook, the news …

If you have come here to read something funny, clever, or just downright bizarre…I’m not sure this is your day. …

There are some phone calls that you dread getting. There are others that you can’t wait to answer. Then there …